New Year’s Eve last year was a helluva good time off in remote western Oklahoma, so we decided to do it again. This year, we’re spending the time between Christmas and New Year’s Day in West Texas. We’ll meet up in San Angelo, which is a decent half-way spot for all of us, then head down toward Terlingua and Big Bend.

This is another one of those “stay in one place” trips kinda like New Mexico/Trinity, rather than our longer circuits. We’ve got a reservation for a few nights in Terlingua, which I had to very carefully explain to the others is “almost not a real place” as much as it is two motels, many campgrounds, RVs parked alongside the highway, and a bar or three. I’ve never actually seen it in daylight.

But it seems to have grown up ever-so-slightly since I was there last. They’ve even got a gas station and a coffee shop! For New Year’s Eve proper, we’ll leave our motel and camp in the park for the night, then start back home on New Year’s Day.

Having appointed myself Chief Texan Route Planner, I marked a few hikes on the map that I wanted to do in addition to the off-road adventures.

George is very excited to take his Renegade on Black Gap Road, which is apparently a “Jeep Thing” for which he can earn some kind of a badge by checking in online? I hate to tell him he’ll be about a thousand miles from the nearest cell tower…

And of course, Evan had the Rover in pieces all month, but it seems to be sorted now.

Personally, as much as I am excited to see how the “new” Xterra handles some Big Bend adventures, I am even more excited for some hiking on this one. West Texas is beautiful in a very unique way, and I’m looking forward to getting back out there for the first time in about two years. A photographer friend of mine went recently and shared some inspiration that I’ve been pining about ever since.

Looking forward the week, it’ll be highs in the 60s, lows in the 40s with clear skies and a government shutdown. We’re not entirely sure what that’ll do to the park. From what we’ve been able to gather, the park itself will be “open” in that it won’t be closed to entry, but every service will be shuttered. We should still be able to do the hiking and driving we have planned, but we will have to cancel the border crossing at Boquillas and possibly the camping night.

If that happens, we’ll camp in Big Bend Ranch State Park instead, which would also be an exciting adventure. The state publishes a 20 page booklet called Roads to Nowhere on how dangerous driving is in BBRSP, as there isn’t a single paved road in the park, but the subtext is “you’d also be stupid to not do this.”

Not gonna lie, after our trip to New Mexico and my own roadtrips to Nevada and Colorado this year, I’ve screamed past the Big Bend National Park exit on I-10 three times already this year and always had the itch to stop. Excited to bring the group to The Great State and show off one of our treasures.

Merry Christmas to all, I hope Santa brings you lots of car parts. 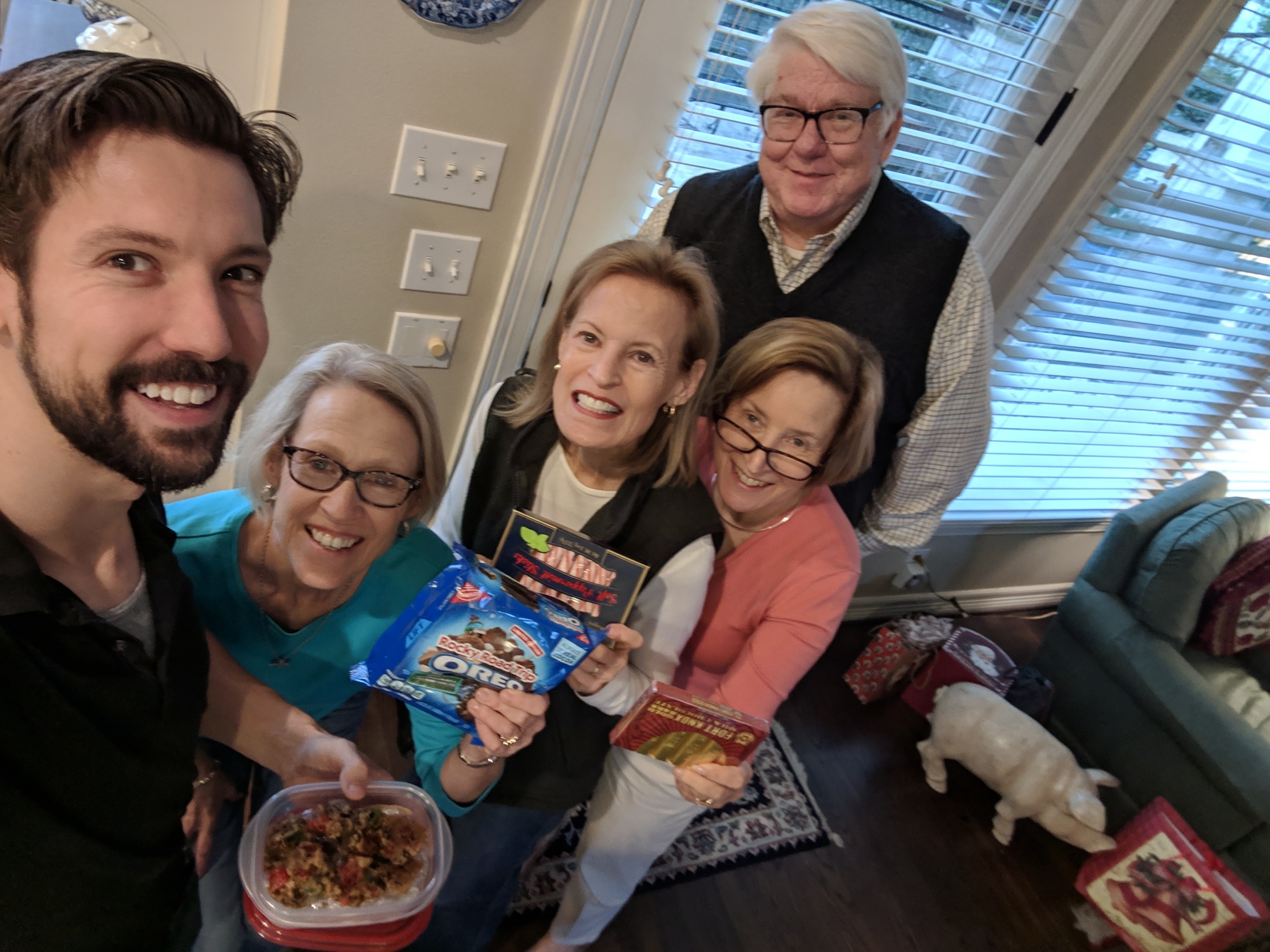 Made a quick stop on the way out of town. Mom, Aunts Leslie and Jennifer, and Uncle Billy sent me with a million Christmas cookies. 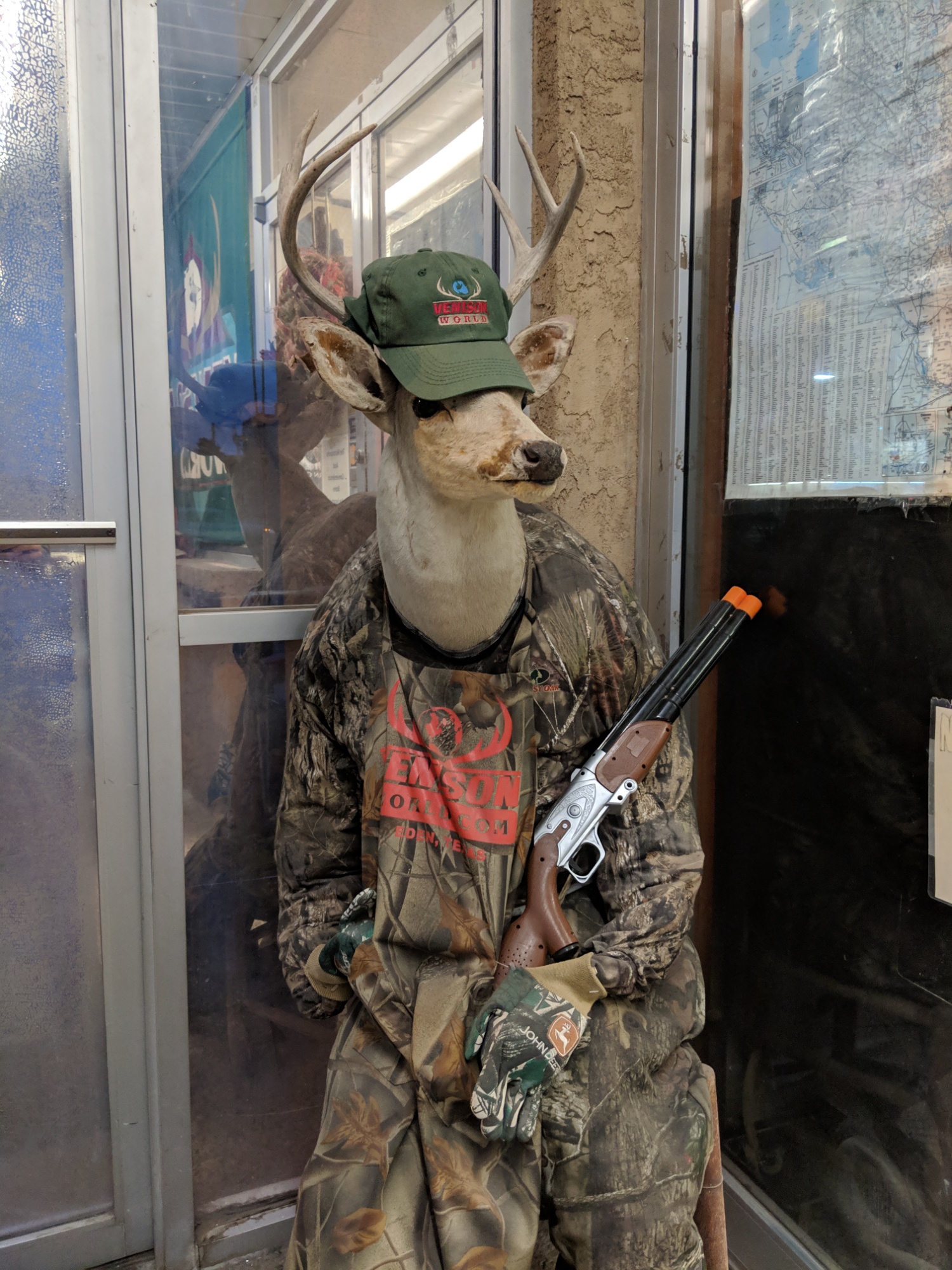 Well, two of us anyway. After hours of barreling though intense storms, Evan and I have found a bar in San Angelo for dinner. George got a later start to the drive so he’ll make it in eventually. Hopefully the weather lets up a little, that was a mess!

George is still on the way, and Evan and I got to having a little talk about “wow it has been a helluva year” because yes, that. He put up his “year in review” on his OppositeLock blog and it’s totally worth a look, I’m glad to have been able to join for a pretty big chunk of it.

A year ago we were starting Oklahoma Adventure Trail West, followed by East a few months later in Xterra 2.0, then I did a roadtrip through New Mexico and Colorado, and then we did Trinity Site together, then I drove to Vegas for a climbing trip and made a few stops along the way including Tulsa, and now we’re here!

Well, between desperately trying to get a graphic design project shipped, doing laundry, starting to pack because I treat procrastination like a competitive sport, cleaning up from Christmas a little, visiting with relatives once more before they head home, and being out of coffee… again… this morning was a little more involved than I had hoped for. But by the stroke of… like 3pm, I managed to get on the road!

Austin has been drizzly all day, but once I got out west it started to clear up. Until it didn’t. I came over a hill just outside Llano and within about 5 minutes, it became incredibly dark, the temperature dropped almost 20 degrees, and rain started pelting the car loudly enough that I thought it was hail. But I had it easy. Evan ended up with flooded highways and driving through towns in total darkness from power outages as he came in from OKC.

Thankfully, he and I had dinner at a local brewhouse, there is whiskey, and Mom sent me on the road with more cookies than I usually have in an entire year, so we’ll be okay.

And George is here! Apparently the weather got worse: while I thought about stopping, and Evan passed many people who were stopped, George actually did stop briefly around Wichita Falls due to weather. He didn’t take any photos for me to post, though, which is lame.

We’re winding down tonight while watching TCU and Cal be entirely unable to finish a football game under their own power while making plans for tomorrow. So far the plan is to pick up some provisions at the HEB then head toward Terlingua via Fort Davis, but no itinerary in particular. 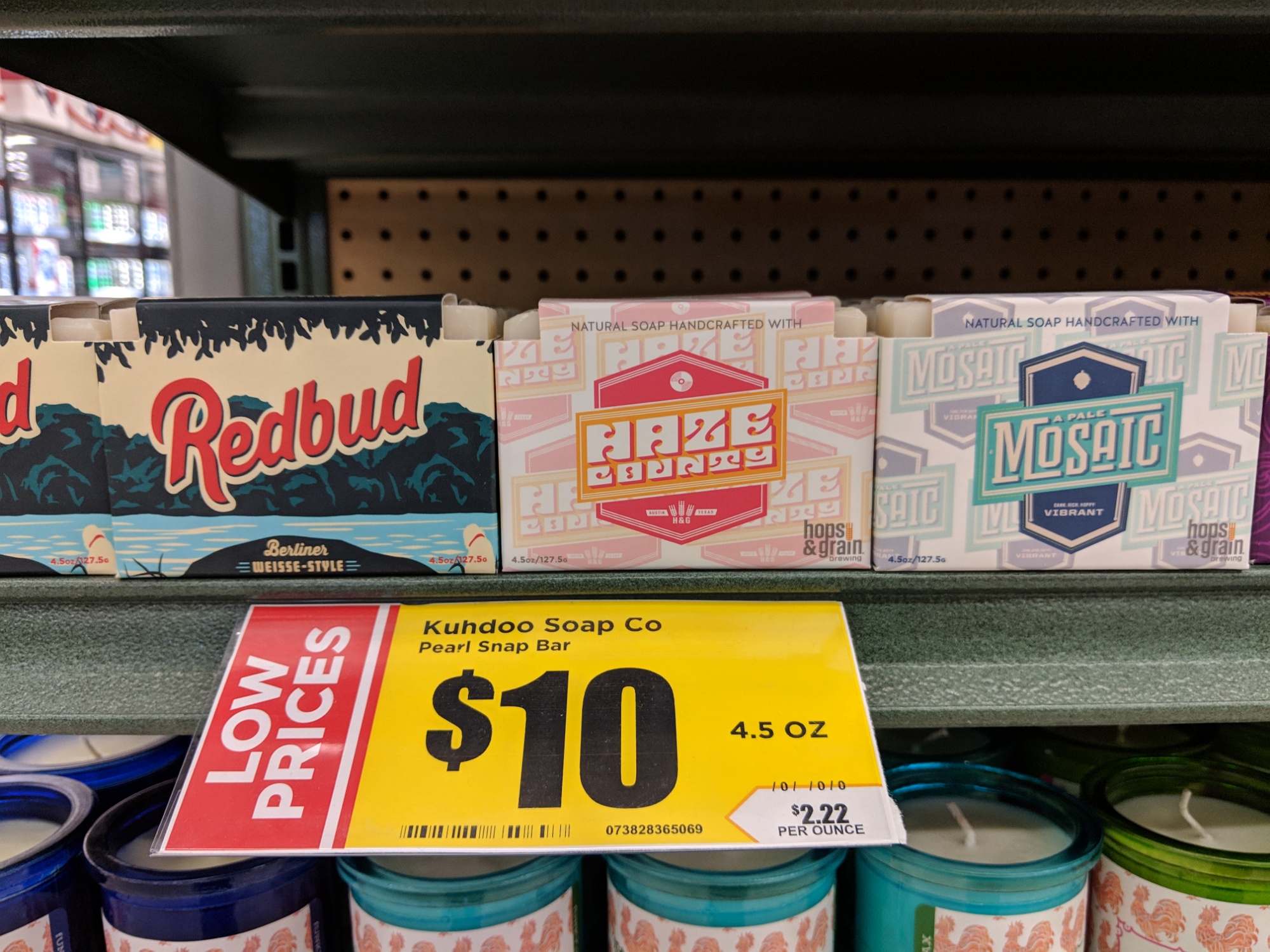 All of the local Austin beers are for sale at the San Angelo HEB, but they’re soap. Like actually. There’s an Austin Beerworks IPA barsoap. What even is that?? 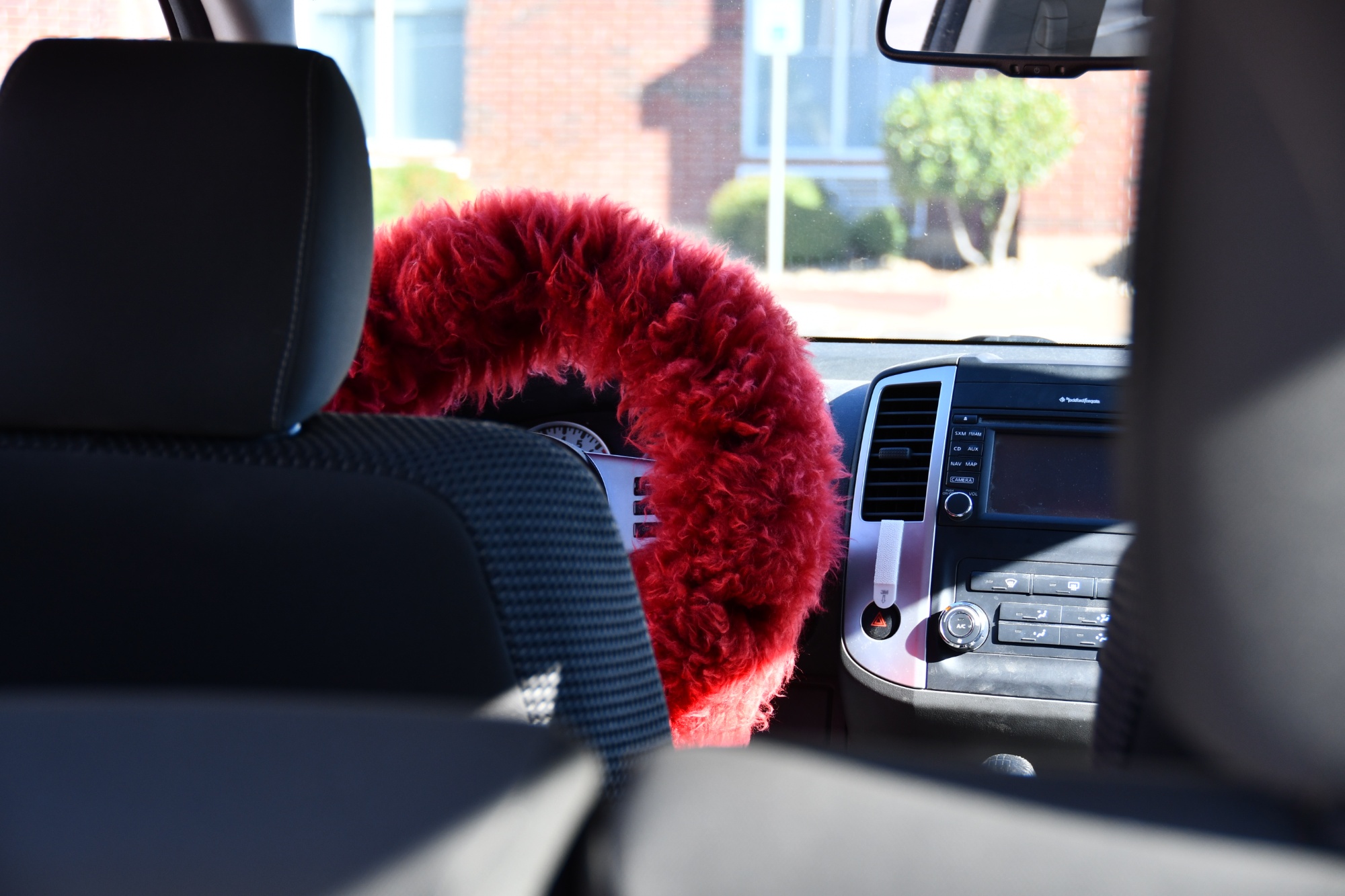 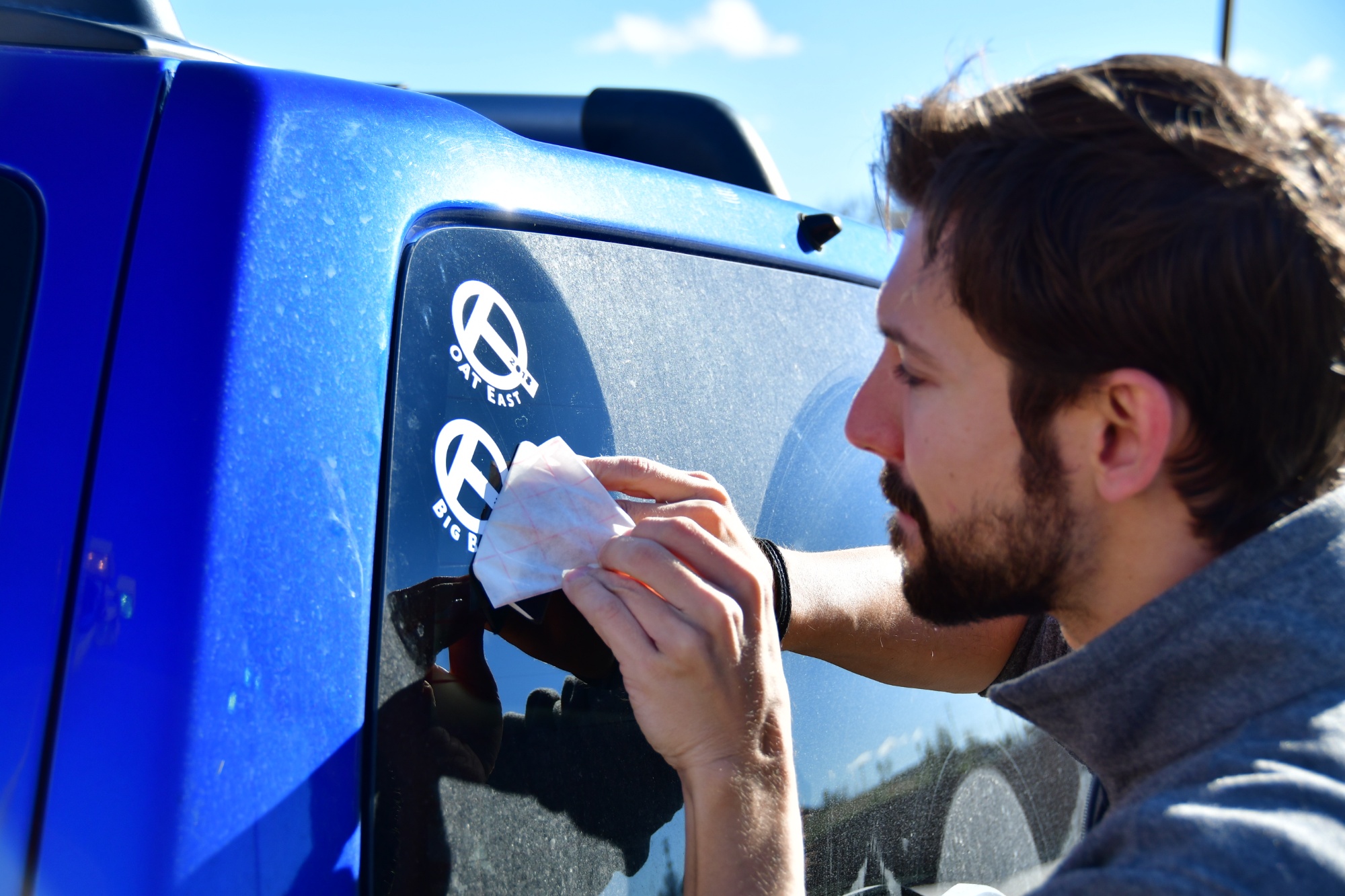 And Evan continues his stickering tradition. I swear we’ll set off soon…

And in accordance with tradition, we are being held up by a Ford.

They circled the problem for you right on the back.